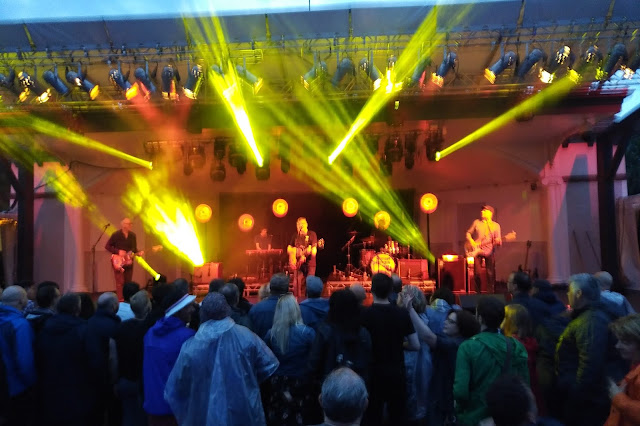 For my fifteenth time seeings Bellshill's finest live, a different venue. The restored Victorian bandstand in Kelvingrove Park, Glasgow. Given that any outdoor event in the West of Scotland is at risk of rain, it was unsurprising that the heavens opened as the support act, (one Nile Marr, son of Johnny, who was pretty good) and it was proper rods bouncing off the floor. Fortunately it dried up for when the Fannies took to the stage.
Starting off with "I Can't Find My Home" from "Howdy!" before a welcome deep cut in early single "God Knows It's True", it was quite sedate for the first seven songs, the crowd all being pretty wet no doubt contributing to that. However once they launched into "Alcoholiday" the crowd surged forward and from then until the end it was business as usual for Teenage Fanclub in Glasgow; that being bouncing.
We got a few new songs including the pretty decent new single "Everything Is Falling Apart", but they’ve obviously decided not to play any of Gerry's tunes, which is a shame as songs like "Star Sign", "Sparky's Dream", "Don't Look Back", "Ain't That Enough" and "Radio" are just too good to leave out.
It was nice to get both "Verisimiltude" and "Your Love Is the Place Where I Come From"(a personal favourite), Raymond’s two best songs, but I couldn’t help but feel that whilst the band is different, it is also less without Gerry. Of my top twenty five Fannies songs only 3 are Raymond tracks, the aforementioned two and ‘Hold On’ from their top notch most recent album, "Here".

"I Don't Want Control Of You" and "The Concept" shone as brightly as ever, and getting their cover of Neil Young's "Don't Cry No Tears" was a real bonus before traditional set closer the incomparable "Everything Flows", (more on this masterpiece here).
So whilst this was not my favourite Teenage Fanclub show, and it does leave me slightly apprehensive about the future, they have enough good songs to keep me hooked, just not as many as they used to.

"Don't cry no tears around me 'cause when all the water has gone the feeling lingers on..."