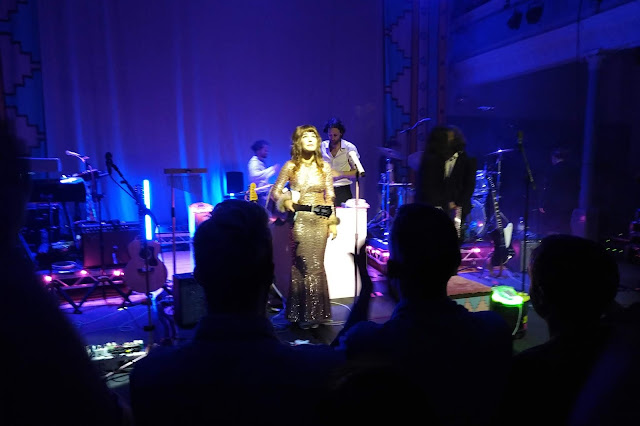 Never having seen Jenny Lewis before, but being a big fan of her most recent album, "On The Line", (full review here), I was looking forward to this gig. It was also a rare opportunity for my wife and I to enjoy a live music show together.

A quick note on the venue, which is an old church with the pews still in situ around the back, sides and upstairs with free standing in the main area. An unusual but atmospheric venue, although the 'stage' area is barely higher than the main floor which would have reduced visibility for some further back. Not a problem for us though as we arrived early and got a spot with only 3 people between us and the barrier.

Coming out and looking fabulous in a full length sparkling gold dress Jenny launched straight into the opening track from "On The Line" , "Heads Gonna Roll".

She has a quirky charisma that clearly didn't have to do too much to win over an enthusiastic crowd that was ready to party. Switching between piano, acoustic and electric guitar as well as 'just' singing, and ably backed by her band she proceeded to delight the Edinburgh audience with a set list that was more than a third drawn from her latest release with the rest drawn from her back catalogue, including some Rilo Kiley numbers.
Some songs clearly came from a deeper place and you could really feel the emotion in them. Certainly both "The Voyager" and "Born Secular" stood out for me.
Only the lack of the title track from "On The Line" stopped this concert from hitting full marks. However given the joyous nature of the evening, which is ironic really considering  the pain in many of the songs, it seems churlish to complain.

The high priestess of quirky cool came to commune with her faithful and they gratefully received her blessing. 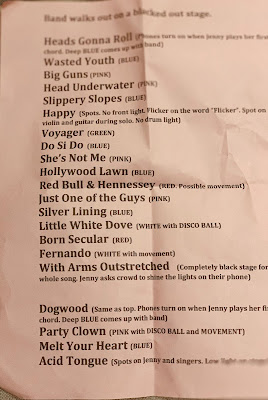 (set list photo courtesy of Terry Smith)
"If you want to get to heaven, get out of this world......"