Guitar: The instrument closest to my heart, and the one where my favourite guitar player and the one whom I consider to be the greatest ever player are one and the same; the jaw-dropping Steve Vai. 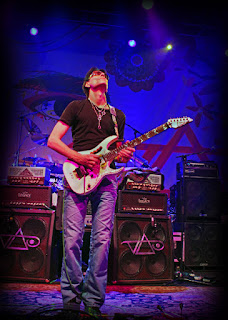 
However I'm going to overrule my heart and go with my head here. Vai is a truly great musician, but he can be a bit esoteric at times. A band with Keith Moon on drums needs a player with a bit of an earthier style.

Thinking of guitarists who have defined or redefined rock playing, it comes down to 3.
Chuck Berry was one of the pioneers of rock n' roll, and inspired most, if not all, of the '60's greats.

Eddie Van Halen changed the technique of all those virtuosos who came after, but he stood on the shoulders of the ultimate guitar hero. A man who had his contemporaries sweating buckets that they were no longer the top dogs. 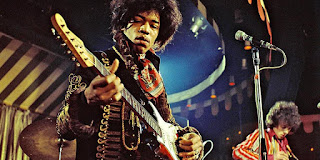 The wisdom of having Hendrix and Moon in the same band, with the attendant chemical and alcohol problems it would cause, is dubious in the extreme . However this is a fantasy exercise, so let's roll with it.

You can divide the history of electric guitar into two eras, pre and post-Hendrix. Ask most professional guitar players who the greatest was, and the majority would name Hendrix.

Certainly there were guitar heroes before Hendrix. The aforementioned Chuck Berry, Eric Clapton, Jeff Beck to name a few. However, Clapton and Pete Townsend themselves have admitted that the game changed once Hendrix arrived. He was THE guitar hero.

He had it all. Draw-dropping chops, charisma, and often overlooked, great rhythm playing. Check out this pre-fame session playing here.

So far then we have Keith Moon, Paul McCartney and Jimi Hendrix. Who will complete this powerhouse line up?

This time Neil treats us to excerpts from an Alabama show, (hence the title), from the 1973 tour previously documented on "Time Fades Away". Whilst a commercial success, the tour was fraught due to Young's grief over the drug-induced death of Danny Whitten that led to his masterpieces "Tonight's The Night" and "On The Beach", and his discomfort in translating his sound to the big arenas his success now found him playing. Neil has previously stated that "Time Fades Away" is his worst album. Those of us who have endured "Everybody's Rockin'" or "Landing On Water" might beg to differ....

Anyway another snapshot of that tour emerges here, and an altogether more lighter mood prevails. The autobiographical &…
Post a Comment
Read more

May 12, 2019
Continuing a series about songs death and dying. These are not necessarily songs that talk about the process of dying, rather as the title suggests, songs that I could imagine listening to on my death bed, or taking as consolation during or after a funeral.


With that said here's my next choice.


No 3: Gonna Be A Darkness - The Jayhawks

From their superb collection of songs that main man Gary Louris wrote with other artists, (full review here), comes this gem co-written with Jakob Dylan.


I love the extended musical introduction, starting with the mandolin, building with the bass and piano.It sets a lovely relaxed groove that hints at the sadness to come.
Louris and drummer Tim O'Reagan blend their voices beauti…
Post a Comment
Read more

March 24, 2019
A new album from Tim Showalter which, barring a final misstep, hits all the Americana, (and more), marks. This album is heartfelt, sleazy, uplifting, classic and referential all at the same time whilst still pointing forwards.

The beginning is inauspicious. "Weird Ways" starts out like a standard Ryan Adams ballad, but takes off halfway through in a way that reveals the pedigree of the other musicians on the album. After hearing this track I thought it sounded like the aforementioned Mr Adams playing with My Morning Jacket(MMJ). The reverb drenched sound kept rearing its head and a little research revealed that, minus main man Jim James, they were the backing musicians on the album . No wonder I kept hearing them! As a band who has produced much that I like this was a good thing.

After "Weird Ways" heads for the stars we stay there with "Hyperspace Blues" which is one for fans of Jason Pierce's Spiritualized, and sounds just as a song with that title s…
1 comment
Read more

On The Line by Jenny Lewis - Album Review

April 05, 2019
Arriving with positive notices and an all-star supporting cast that includes a former Beatle in Ringo Starr, a former Heartbreaker in Benmont Tench along with renowned players like Jim Keltner, Don Was and produced by Ryan Adams it would be easy to dismiss such a description as too good to be true.
However, sometimes it is okay to believe the hype..
The 4th solo album from Jenny Lewis is an example of the old adage that misery makes for great art, and is another entry into the canon of great break-up albums.
It is crammed with catchy melodies, expert playing and excellent, if sometimes just a little too cool for school, songwriting. Right from the very start with "Heads Gonna Roll" the sweetness of the melodies is leavened with a perfectly judged dose of underlying menace and bitterness.
Mention has to be given to the Hammond solo from Benmont Tench on this track. The tone is deliciously fat and filthy in the best possible way.
"Wasted Youth" continues with a ridiculous…
Post a Comment
Read more

July 15, 2019
Continuing a series about songs death and dying. These are not necessarily songs that talk about the process of dying, rather as the title suggests, songs that I could imagine listening to on my death bed, or taking as consolation during or after a funeral.

No3: featuring "Gonna Be A Darkness" by The Jayhawks here

With that said here's my next choice.

No 4: Everything Flows - Teenage Fanclub

This song is here less for it's explicit subject matter rather than the way it makes me feel.
Certainly the lyrics, "I'll never know which way to flow, set a course that I don't know" talk about journeying, searching and convey an ambiguity that could apply to a passage beyond this life.

April 28, 2019
After the Broadway experience comes a new song, and my initial thoughts upon hearing it were not about this track specifically, but what it means for the upcoming "Western Stars" album in June. As Bruce has said, this is a different type of album, not a rocker but a 'return to sweeping, cinematic orchestral arrangements'.


My hope is that we are going to get Bruce's version of "Nashville Skyline", as the track has a laid back, country feel, with a rhythm that immediately evokes "Everybody's Talkin' ".

Another one of his early influences, the great Roy Orbison, also shines through, and as a defender of "Outlaw Pete" from "Magic", (more on that here), this can only be a good thing. His vocal has a country tinge and the pedal steel and strings complete the image.

Given his battles with depression, documented in his autobiography, the lines about "being too fond of the blues" and "loving the lonely place&q…
1 comment
Read more

I Am Easy To Find by The National - Album Review

May 25, 2019
Accompanying a 26 minute film starring Alicia Vikander, for which edited parts of this album comprise the soundtrack, the new album from The National arrives with perhaps impossible expectations.

After the run from "Boxer" through the transcendent heights of "High Violet" to the continued excellence of "Trouble Will Find Me" and "Sleep Well Beast" it has become normal to expect nothing but the best from the indie rock standard bearers.

Unfortunately, whilst there is much to enjoy here, it is a definite step down from those mentioned above. Perhaps, understandably, wanting to continue to stretch themselves this album suffers from the art project surrounding it. Not a strict soundtrack, but definitely less than a normal album, (whatever that is of course!), too many tracks meander into quickly forgotten homogeneity. Whilst these songs work better in shorter snippets accompanying the film, the album is released as that, an album and needs to be judg…
Post a Comment
Read more
Follow @Powderfinger71