September 21, 2018
Just a short post today to mention that my voice, and ramblings, feature in today's episode of the superb Rockin' The Suburbs podcast.

If you've never checked it out, I highly recommend you do. Jim & Patrick put out five shows a week, and I've discovered some great new music through their show.

Over The Rhine and Jason Isbell to name but two. It's one of the best music podcasts out there.

Available at all the usual podcast sources, and at www.suburbspod.com

I talk about Nuclear Valdez's "Summer", David Bowie's "Strangers When We Meet" and Bernard Butler's "Not Alone".

As well as Teenage Fanclub of course!

The great version of "Let's Dance" can be found here. 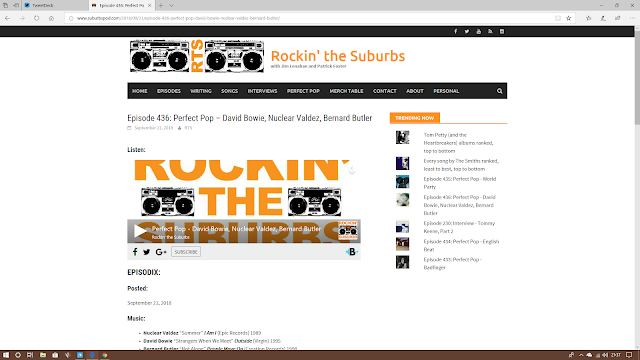 May 12, 2019
Continuing a series about songs death and dying.  These are not necessarily songs that talk about the process of dying, rather as the title suggests, songs that I could imagine listening to on my death bed, or taking as consolation during or after a funeral.  Morbid? I think not, as death is part of life. If we all talked about it a little more, maybe we'd cope with it better. No 1: featuring "Land Of Hope & Dreams" by Bruce Springsteen here No 2: featuring "Look On Down From The Bridge" by Mazzy Star here With that said here's my next choice. No 3: Gonna Be A Darkness - The Jayhawks From their superb collection of songs that main man Gary Louris wrote with other artists, (full review here ), comes this gem co-written with Jakob Dylan. I love the extended musical introduction, starting with the mandolin, building with the bass and piano.It sets a lovely relaxed groove that hints at the sadness to come. Louris and drummer Tim O'Rea
Post a comment
Read more

August 09, 2018
Day two is done, and more excellent beers consumed. 1. Krausened Lager, Budweiser Budvar 4% After the Tankove Pivo being my beer of the day yesterday,  hopes were high for the Krausened. An unfiltered and unpasteurised lager. Not quite up there with the tank beer, but still very refreshing. A slight aftertaste that wasn't there on the Tankove, and overall I preferred the temperature controlled option. A good start though. 2. Cinnamon Porter, Boulder Beer Company 5.9% A lovely Porter, the cinnamon being very subtle. Sweet and smooth, I'd happily return to this. 3. Kölsch, Cölner Hofbräu Früh 4.8% Clean, crisp and clear with a softness on the tongue that surprises. Could easily go a few pints of this on a hot summer's day. 4. Make America Juicy Again, Heretic Brewing Company 6.5% A New England IPA, hazy and fruity as you'd expect from this style, but more tart and lacking the rich smoothness of other NEIPAs I've had. 5. Salted Caramel Lucaria, Thornbridge 4.
3 comments
Read more
Follow @Powderfinger71