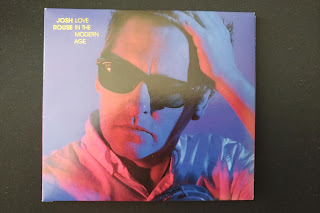 I picked up Josh Rouse's latest album at the show reviewed earlier, purely on the strength of the new songs he'd debuted that night.

Firstly, the songs are almost uniformly great, and whilst some might complain at only 9 tracks on an album, less is sometimes more. "Leave 'em wanting more" is a good policy. I find it hard to accept, for example, that The Beatles "White Album", to pick a famous example, wouldn't have been improved by being cut to a single disc. A topic for another day perhaps?

Back to matters in hand. The album starts out with what is my favourite track from the set, "Salton Sea". It sets out the album's pop stylings and production, gated snare and prominent synths, occasional vocoder flourishes, etc. that continue throughout the album. With a nice build at the end to some instrumental guitar, it is a great start.

The tunes keep coming, with the title track, "Businessman", and "Women And The Wind"  forming a triumvirate of ear worms. "Tropic Moon" is the aural equivalent of a languid trip down river on a summer evening.

Catchy backing vocals have long been a feature of Josh's work and that is no exception here. His voice still conveys a laid back intimacy that complements the tunes well.

The only real negative for me is the overly 1980's feel, and the production choices that go with that. I'd much rather have heard a more organic sounding version of this album with in the style of "Nashville" or "Subtitulo".

Putting that aside this is an excellent album that has enjoyed many repeated plays, and will continue to do so. The only question, given the general excellence and consistency of his output, is why isn't Josh Rouse more well known? That I can't answer, but do yourself a favour and check out this or any of his other albums. Particularly those mentioned above along with "1972".